Categories
Pages
Home » About Us »

The USS St. Lo (formerly Midway) CVE-63/VC-65 Association is dedicated to preserving the legacy of the men who served on the USS St. Lo and in the VC-65 Air Squadron during WW II. In defense of our nation and way of life, many of these young men made the ultimate sacrifice. They deserve the honor of our remembrances, as do the men who survived the battles.

Friends and family of the USS St. Lo Association at the 2011 reunion in Tulsa, Oklahoma. (Click on the photo to enlarge.)

The USS St. Lo participated in the largest naval battle in history, and claimed a pivotal part of that history by becoming the first US ship to be sunk by a kamikaze during the Battle off Samar, the third and final of the confrontations between the US Navy and the Imperial Japanese Fleet during the Battle of Leyte Gulf.

The Battle off Samar was a true David versus Goliath event. The much smaller destroyers, destroyer escorts, and jeep carriers of Taffy 3 fearlessly met the Imperial Japanese Fleet, comprised of battleships and cruisers. The men of these ships and aircrews fought so valiantly, the Japanese were forced to retire before accomplishing their mission of bombarding General MacArthur’s invasion beachhead at Leyte.

Of the thirteen ships of Taffy 3, five were sunk, the USS Hoel, the USS Samuel B. Roberts, the USS Johnston, the USS Gambier Bay (the only carrier sunk by gunfire in WW II), and the USS St. Lo. Over 900 hundred young men lost their lives.

Hermann Wouk wrote in War and Remembrance: “The vision of Sprague’s three destroyers – the Johnston, the Hoel, and the Hermann – charging out of the smoke and the rain straight toward Kurita’s battleships and cruisers, can endure as a picture of the way Americans fight when they don’t have superiority. Our school-children should know about that incident, and our enemies should ponder it.”

The greatest hope of these WWII Navy veterans is that the legacy of the USS St. Lo and its crew would be preserved for generations to come. We won’t forget… We will remember. 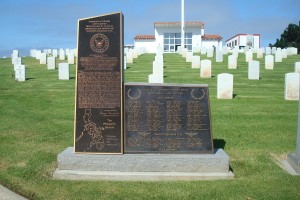 In 1994, the USS St. Lo Association placed a monument to our fallen shipmates at Fort Rosecrans National Cemetery in San Diego, CA.

In 1984 Task Unit 77.4.3 (Taffy 3) held a 40th Anniversary Memorial in Charleston, S.C. to honor their shipmates who were killed in action at the Battle Of Leyte Gulf. All survivors from Taffy III were invited to attend this ceremony as representatives from their respective ships.

At the Taffy III 40th Anniversary Memorial, the USS St. Lo was represented by approximately 30 survivors. Before concluding the event, the USS St. Lo group gathered for dinner with their spouses and talked about the moving memorial they had just witnessed that day. How appropriate it would be to assemble more USS St. Lo survivors and honor their own shipmates who had been killed in action on October 25, 1944. A number of other Taffy III ships had already formed their own associations and were holding annual reunions.

The idea was born then, and if other ships of Taffy III could do it, so could the shipmates of the USS St. Lo.

The group then decided to hold the first USS St. Lo Association Reunion in St. Louis, Missouri in 1985. Paul and Corky Michel volunteered to host this first reunion. John Ibe predicted 200 guests, and actually had more than 300 attendees participate. The focal point for the reunion was to bring together the USS St. Lo survivors and their families to honor and pay tribute to the ship’s crew and squadron who made the ultimate sacrifice on October 25, 1944, when the USS St. Lo was sunk by a kamikaze during the Battle off Samar in Leyte Gulf. In addition, the setting would provide USS St. Lo survivors and their families an opportunity in which to renew friendships and exchange accounts of their personal experiences.

The USS St. Lo Association has continued to host reunions each October on the anniversary of the sinking of the USS St Lo. Each year the reunion grows in attendance, with 2nd, 3rd and 4th generation attendees, and others who have just heard of the group interested in hearing the stories. At the 2002 Tucson, Arizona, reunion, Jim Hornfischer attended and was able to use material and interviews from the reunion to use in his book, Last Stand of the Tin Can Sailors. Everyone, including family and non-family members are more than welcome to attend, and are guaranteed to have a good time.

View photos from our past reunions