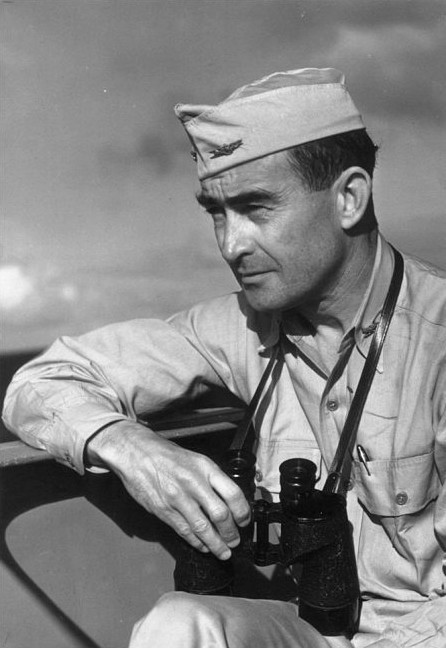 Captain Francis McKenna on the bridge of the USS Midway in May 1944.

In 1917, he was appointed to the United States Naval Academy. Midshipman McKenna graduated in the top half of the class of 1920. Ensign McKenna then reported on board the battleship USS North Dakota.

In April of 1926, McKenna was awarded his Navy Wings when he successfully completed flight training, and one year later became a torpedo pilot on the USS Lexington. During this assignment on May 12 of 1927, he married Catherine Eldredge (Cheatham).

For several years McKenna advanced in his naval career, serving several assignments aboard various ships, and receiving several promotions. At then end of his assignment in the Aleutians in April 1943, he was promoted to Captain and ordered as the Prospective Commanding Officer of the escort carrier USS Midway.

On the 10th of October 1944, USS Midway was renamed St. Lo, thereby freeing the name for a super carrier then under construction. Just one year after its commission, on October 25, 1944, the USS St. Lo was sunk by a Kamikaze pilot.

Upon his retirement in 1950, he was promoted to the rank of Rear Admiral.

Admiral McKenna was awarded the Navy Cross (second only to the Medal of Honor), the Bronze Star with Combat “V,” and the Legion of Merit. Additionally, and of great pride to him, he was authorized—with the rest of the crew of USS St. Lo (CVE-63 / VC-65)—to wear the Presidential Unit Citation for the magnificent job performed by ship and men at Leyte Gulf as a unit of “Taffy 3” (TU 77.4.3).

Following his retirement from the Navy in 1950, Admiral McKenna worked as a consultant to the Grumman Aircraft Engineering Corporation, until retiring in 1961. He and his family resided in Manhasset, New York, from 1948 until his death from cancer in 1969.

Admiral McKenna was survived by his wife, Catherine, who died in January 1981, his stepson Roger S. Bagnall of New Jersey, his daughter Elizabeth, who died in 1986, and his son Michael, who resides in Rhode Island, and now serves on the Board of Directors for the USS St. Lo Association.